We’re excited to announce the launch of the mjf fantasy festival podcast!

We’ll unpick what it is that makes a festival so magical; from the setting, to the food and drink, weather, company, fashion – whilst delving deeper into their musical tastes.

The series of six episodes launches Tuesday 25th January at 6pm and features the co-founder and Director of Operations at Black Lives in Music, Roger Wilson.

This podcast was co-created and produced by James Howe.

manchester jazz festival is set to premiere four new works in an online festival this January, celebrating the creativity of digital music making.

The mjf digital originals festival will run from January 17-21 and share a newly commissioned digital work from the most promising northern musicians each night at 6pm.

The new works range from AI-interpreted musicians and immersive drum performances to dirty cinematic electronica and a suite of music for audiences to enjoy in their own meaningful locations. A new work will be premiered simultaneously across manchester jazz festival’s website, YouTube and Facebook channels each night at 6pm. 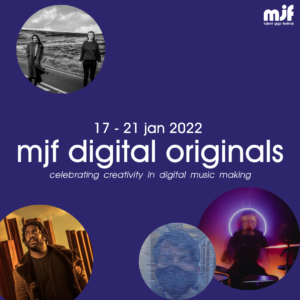 The full line up for the mjf digital originals festival is as follows:

Spaces by Night Porter – Monday January 17
Led by Leeds saxophonist/composer Emma Johnson and Manchester-based singer/composer Nishla Smith, Night Porter have created a suite of music celebrating outdoor spaces.
Audiences will be encouraged to visit such spaces near to them and listen to the pieces in the environments for which they were intended, creating a connected yet remote listening experience that each person can make their own. Audiences can also watch a new video for each piece from the comfort of their own home.

Gandering by Mark Hanslip – Tuesday January 18
A radical audio-visual work in the form of miniatures fusing four solo improvisations from fellow musicians with AI-generated imagery that itself responds in real time to the music being created. Borne out of the surreal dystopia of lockdown and responding to the barriers placed on physical and musical interaction, the resulting pieces are a fitting reflection of our recent collective experience, a breath-taking example of the potential beauty to be co-created by humans and machines and a ground-breaking methodology for creating new work.

Power Out by Sarah Heneghan – Wednesday January 19
An immersive, powerful duet between solo drummer Sarah Heneghan and contemporary dancer Megan Hatto, in which Sarah’s EDM-inspired Sheffield beats explode with dynamic lighting design, improvisation and movement. Catch the premiere of two recordings from this full-length show that was originally evolved through the mjf hothouse talent development programme.

Meet Me in the Real by Dirty Freud – Thursday January 20
The unruly prince of electronica, Ninja Tune fave and Glastonbury electronic artist brings together some cutting-edge improvisers and soulful vocalists for a set of anything-goes collaborations, mashing up their jazz lines with infectious grooves, animations and his own personal style of dirty cinematic electronica. As part of the digital festival, audiences can catch the music video premiere of Dirty Freud’s new track Fly Girl and listen to his new EP Meet Me in the Real exclusively for one week only before its general release in April.

Meet the mjf originals artists – Friday January 21
A short film for audiences to find out more about our mjf originals artists, their creative process and how they made their work. Produced by Badger and Combes and featuring interviews with Emma Johnson, Nishla Smith, Mark Hanslip, Sarah Heneghan and Dirty Freud.
The digital festival is a new addition to the festival’s annual open commissioning scheme, mjf originals.

mjf CEO and Artistic Director Steve Mead said: “mjf originals is our commissioning scheme for northern artists to create jazz-related new music. Since our very first commission in 2000, mjf originals has produced 30 major works, each premiered at one of our annual festivals.
“In 2021, we took a new approach to tackle the challenges of creating new work in different times and invited artists’ ideas on devising new work that could live in both the physical and digital realm.
“This suite of four works also allowed us to work with a wider range of artists and create more commissions than usual, and we’re really blown away with what they’ve come up with. We can’t wait to share the results with mjf audiences online, and we hope to be bringing some of this new music to the live festival later this year.”